How the Caps can Win Game 2

The Caps stunk it up in Game 1 against the Isles Wednesday. They looked lethargic at the beginning, started to panic towards the middle, and eventually just gave up. It was probably the worst game I've seen the Caps play since the St. Louis game in November, a surprisingly terrible start to what should have been a good postseason.

However, what's in the past is in the past. The Caps realize they messed up and I have confidence in Barry Trotz that he will do whatever it takes to remedy the mistakes made. For the most part the errors the Caps made were basic: too many turnovers, rushed shots, poor positioning for passes and rebounds, etc.

Beyond that, what can the Caps learn from the Game 1 loss? Here's a look at some of the elements of the game the Caps need to improve: 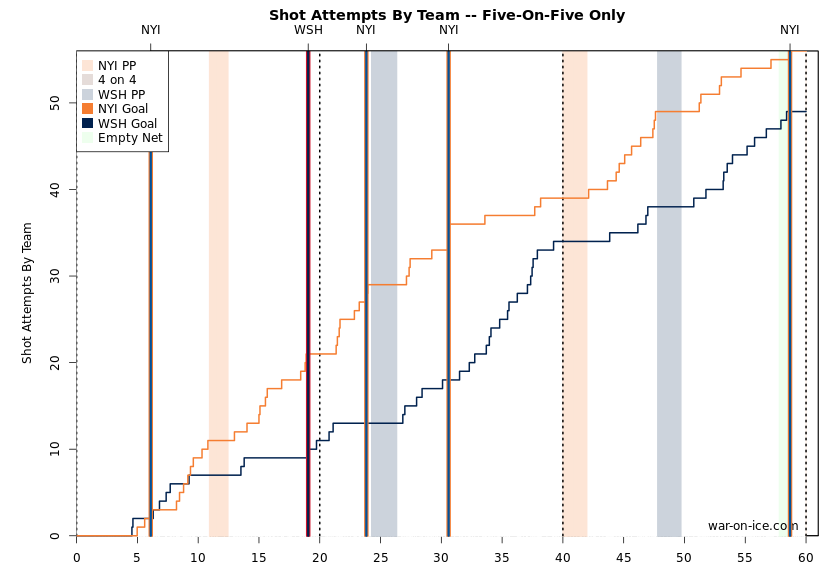 As Caps fans (and all hockey fans) implore of their team, the Caps need to shoot the puck. They were being completely out-possessed and outshot by the Isles. I was at the game, and it was maddening to see the Caps try to force passes when the Isles defense was in perfect position to stop it from going through. The Caps made Brian Strait look like Shea Weber in Game 1, and that is not something that can continue going forward.

Looking at the shot attempts chart, the Caps also need to sustain consistent pressure like the Isles did for the most part. The interval from the Islanders first goal to the Islanders second goal saw the bad guys pull way ahead of the Caps in shot attempts. We already know that the Isles are a very good 5 vs. 5 team (one of the best in the league), but the Caps cannot continue to be outplayed at even strength like they were in Game 1. The Isles PK, although bad numerically, operated at a 90%+ clip in March and April, and yesterday they put pressure on the Caps PP and did an excellent job limiting the Caps to one shot attempt at a time. If that trend continues, the Caps really need to step it up 5 on 5 lest the season end very soon.

To be concise, the Caps just need to shoot more. Jaroslav Halak is not the kind of goalie who is going to stop every shot he faces, and if we hit him with a high shot volume, he is going to give up rebounds and struggle. Shooting more is the first thing the Caps need to fix. 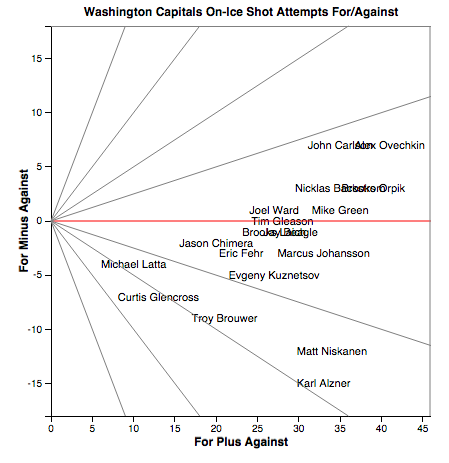 When I mentioned how the Caps were panicking earlier, I was mainly referring to how Barry Trotz was constantly switching up the lines at even strength to try to create a rhythm. Save for a few good shifts at the end of the second period and beginning of the third period, the Caps were being consistently outplayed at 5 on 5, as can be seen from this chart. Very few players were on the right side of the Corsi For/Minus line.

Alex Ovechkin is always going to be a force on 5 on 5 just based on the sheer volume of shots he produces. Therefore anyone can play with him and be above the red line, but that does not necessarily mean he is a good fit on that line (see: Joel Ward). What OV needs on his line is a playmaking center with a decent to good pass and a power forward who can muck it up and get rebounds. Maybe Curtis Glencross would be good in that role?

Nick Backstrom on the 2nd line was a tremendous idea from Trotz, as it allows the Caps to increase their scoring depth. However, Troy Brouwer is always a possession black hole, so it may not be a great idea to give him Top 6 minutes, especially seeing how atrocious he was last game. That means there is a toss-up between Jay Beagle and Brooks Laich for the 2RW slot. I hate to say it, but I think Beagle deserves it, and he also will provide a steady defensive presence for the second line. If you really want to switch things up, put Fehr on the 2RW and put Beagle at 3C, but I don't see Trotz doing that.

This is how I'd like to see the lines tomorrow:

I am extremely wary of that third line. Laich, Beagle and Brouwer all play the same vein of muck it up hockey, but unfortunately they don't do it all that well, thus leading to the poor Corsi differentials seen above. Still, this would allow a balance of depth, style and energy that will catalyze the team.

(Of course, playing Burakovsky over Chimera would also be a good idea, but let's not get too crazy now).

In conclusion, there are two main things the Caps need to do to win tomorrow: play clean and shoot the darn puck. If Trotz decides that the Caps need a push, then shaking up the lines would be a good start. (Although with Trotz you run the risk of putting Beagle or Chimera on the first line). Whatever happens, I expect the Caps to play much better in Game 2 than they did in Game 1, and I am standing by my prediction of Caps in 6 games.

Make sure to tune in to CSN tomorrow at 7pm for Game 2, and as always...