Why Alex Ovechkin Will Win the Hart Trophy 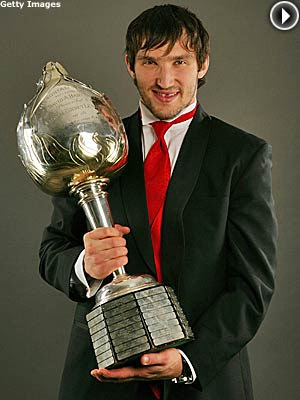 Getty Images
Let me start by saying one thing: John Tavares should win the Hart Trophy this year.

I'm not saying he will, or that I want him to. But the Hart Trophy is awarded to the player deemed most valuable to his team. Without Sidney Crosby (the other of the three finalists), the Penguins have Evgeni Malkin, Jarome Iginla, et al. Without Alex Ovechkin, the Caps still have two other players (Mike Ribeiro and Nick Backstrom) who had more points than Tavares, who led the New York Islanders. Without Tavares, the Isles have... Matt Moulson? Kyle Okposo? Brad Boyes?? Ovechkin probably made Backstrom's stats better with his even strength goals and Ribeiro's better with his power-play goals, but Tavares was arguably more valuable to his team than Ovechkin or Crosby.

That being said, here is why Alex Ovechkin will win the Hart this year:

1. He was EXTREMELY valuable to his team. No, I am not trying to contradict what I said earlier. Tavares was arguably more valuable, but OV was still important. Ovechkin had 9 goals in the first 25 games, and than Caps were 10-14-1 (the 9 goals are misleading; a third of those came courtesy of a hat trick against the Devils). OV scored 23 goals in the next 23 games, and the Caps went 17-4-2. The two halves of this season show just how important Ovechkin was to the Caps. Without him, I highly doubt the Caps make the playoffs this year.

2. He had a great season statistically. The Hart is not supposed to favor stats alone, but it invariably does. Crosby would have had the best season points-wise and assists-wise of the three (no surprise there), but Ovechkin scored 32 goals to win the Richard trophy for most goals fairly easily. Chances are Crosby (who had 15 goals before the injury) would not have scored 18 goals in 12 games to steal OV's crown. Tavares also did well goal-wise, finishing third with 28 goals, but even taking out Ovechkin's two empty-net goals, he wins the Richard (indeed, if he had made the 5 empty-netters he missed this year, he would have broken Peter Bondra's record for goals in a 48-game season). Ovechkin also ended up tied with Crosby for third in points with 56. Even if you consider that Crosby missed 12 games, OV ends up only behind him, Steven Stamkos, and Art Ross winner Martin St. Louis. Tavares finished 17th in points, with 47. Taking statistics into account, Ovechkin still should win.

3. History favors him. People have said a person who 'took half the year off' should not win the Hart. Two years ago, however, Corey Perry of the Anaheim Ducks rode a hot streak at the end of the season to the Richard crown and a Hart Trophy. This year, Ovechkin did the same. Albeit the expectations for Ovechkin are much higher than those for Perry, the stories are so similar. Both ended up third in points, both won the Richard, and both carried their team to the playoffs. If things go the way Caps fans want it to, both will have won a Hart that year as well.

Sidney Crosby should not even be in this conversation. He was really good, yes, and will probably win the Ted Lindsay Award for most outstanding player. But his team did well without him when he was injured, going 8-4. Tavares will win a Hart in his career, maybe this year, and certainly in the next few years.

But if Alex Ovechkin wins the Hart, this is why.