Why We Lost Part 2: #2- McDonagh and Girardi 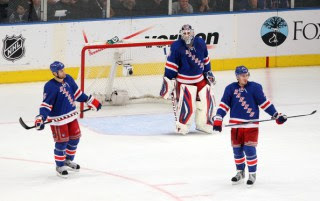 Getty Images
It was a familiar site for the Washington Capitals in this series. The top line barreled into the offensive zone. The crowd's noise level grew, as the fans began to rise either in anticipation or apprehension. Marcus Johansson or Nicklas Backstrom, whomever had the puck when they crossed the blue line, came in and dropped it off. Alex Ovechkin grabbed the puck and skated into a better shooting angle before releasing a wicked shot which looked perfect; until either Ryan McDonagh or Dan Girardi fell to block the shot, sending the puck careening harmlessly out of play.

The top line was perhaps the best line for the Capitals this series. In most shifts, they were generating offense and opportunities, which against most other teams, would be goals. However, because of the great work done by two hard-working defensemen, the top line was held in check for most of the series, contributing just two even-strength goals in the entire series. Alex Ovechkin, the superstar on the team and the reigning 'Rocket' Richard champion, was held to just one goal, a PPG in Game 1, while his other two line mates also only had one goal each, Johansson on a breakaway in Game 1, and Backstrom early in a losing effort in Game 3. The top line had their chances, namely Ovechkin's miss on an empty net in Game 6, but would have had a lot more had the top D pairing for the Rangers been so good.

Ryan McDonagh had a shaky start to the series. He is perhaps most (in)famous for the Delay of Game penalty in OT of Game 2, which came at the end of a 3.5 minute long case and led to Mike Green's game winning goal. But that mistake aside, McDonagh was a key cog in their defense, averaging well over 20 minutes every game and helping shut down the best power play in the league. He brought good grit  to the back line of the Rangers, and helped out offensively as best he could. But his biggest accomplishment was helping shut down Ovechkin. McDonagh was often given the task of guarding the Great 8 and did so admirably, not allowing him to receive passes and take shots and limiting him to just 1 goal and 1 assist, both on power plays.

Dan Girardi was arguably even better than McDonagh. He was a tough player who skated long, tough minutes against the Caps' best lines. In Game 1 alone, a non-OT game, he skated 29 minutes. In a 60 minute game, he skated nearly half of it. The image stuck in my head as I write this is the picture of Ovechkin getting crushed in Game 7 by Girardi. He made very few mistakes, and was ready to drop and block any shot the Caps took (in fact, he exemplified the Rangers defensive philosophy: Stop, Drop, and Block).

An argument could be made that the Rangers D in general would have been enough to control Washington's high-powered offense, but does anybody honestly think Anton Stralman and Michael Del Zotto would have been good enough to stop OV and Backstrom? I highly doubt that. I said in the previous post that without Boyle and Brassard, the Caps would most likely be playing the Bruins right now. Well, the same thing applies to Girardi and McDonagh, although I'd change it a bit. Without those two, the Caps would almost definitely be in the second round this year.