Why We Lost Part 3: #1- Henrik Lundqvist 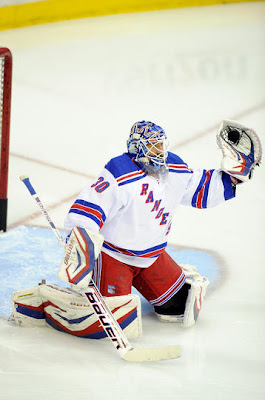 Greg Fiume/ Getty Images
I think we all knew this would be coming. While Brian Boyle and Derrick Brassard gave the Rangers a much needed offensive boost, and Ryan McDonagh and Dan Girardi played stellar shut-down defense, the series would have been over in maybe Game 4 or 5 without King Hank in net for the Blueshirts.

Times have changed since 2009, when the Caps rallied from a 3-1 series deficit to defeat the Rangers in the first round and set up a second round date with the Pittsburgh Penguins (we all know how that turned out). In that series, the Caps victimized Henrik Lundqvist, consistently beating him high on the glove side. The Caps had figured him out! In 2011, Lundqvist was better, but it was hard to make an opinion on him when his offense struggled and the lasting image of the series was him sitting in the crease while Jason Chimera skated behind him and tapped the puck into the empty net. Once again, the Caps had vanquished New York. Last year, things took a turn. Lundqvist was stellar and used his glove well, and the Rangers and their good offense and defense took a hard-fought series.

Hank was absolutely stellar in net for the Rangers, robbing the Caps time and again. He single-handedly thwarted the Caps offense, making save after save. In four of the games, he allowed 2 goals or less including a pair of shutouts, while in the other three he allowed three goals. Two of those were wins. Both of the OT games (which the Caps won) would not have even gone past 60 minutes had it not been the King. In the series, he had a 1.65 GAA and a .947 save percentage. Comparably, Braden Holtby, who had a respectable series, had a 2.22 GAA and a .922 save percentage. Holtby's stats are still pretty good, despite the 5 GA in Game 7. But King Henrik's stats are absolutely insane, especially considering the fact that the Caps outshot the Rangers in every game.

But without Henrik Lundqvist, the Caps are playing the Bruins tonight.
Posted by RY at 9:46 AM