You know what sucks? When out of the three games you don't do previews for, the Caps win two of them.

Today, however, I'm not gonna let that happen, as the Caps travel to Winnipeg to play former division rival Jets at 8:00. Both teams have struggled in the early going, and this will be a game the Caps have to win.

Me (1-4): 5-3 Caps. I missed out on two wins, but that should not happen today. The Jets do not have a very strong offense, averaging 2.30 goals per game, and their defense, although better, is averaging 2.80 goals allowed per game. The Caps, who are scoring 2.50 goals per game, have to be able to take advantage of a subpar defense by converting on the power play, but that will be easier said than done, because the Jets have an 82.0% PK. All in all, these are two pretty evenly matched teams, but I expect the Caps to continue their strong play of late and take a win.

Magic Eraser (2-3): 4-1 Jets. What makes this whole situation even sadder is that the eraser has a better record than me. Again, though, I hope that changes.

Tune in at 8:00 to watch two old division rivals tangle and here's hoping for a win!
Posted by RY at 5:59 PM No comments:

It's been more than 5 months since the last time these two teams played, also in DC. That last time was obviously a disaster, with the Blueshirts destroying the good guys 5-0.

Neither team has changed drastically. Behind the bench, the Rangers switched Alain Vigneault in for John Tortorella, while star Rick Nash is injured. That's pretty much it. For the Caps, we all know how they've changed, with Mikhail Grabovski replacing Mike Ribeiro.

Let's get right into the predictions.

Me (1-3): 4-2 Caps. I finally got my first win of the year against Edmonton (I almost nailed the score too). Hopefully, the streak will continue. This could come down to special teams, in which case the Caps have a distinct advantage. Our powerplay is the best in the league, while the Rangers PK is one of the worst. Both our PK and the Rangers powerplay are in the middle of the pack. If the Caps can draw penalties, this game is over for New York.

Tune in to NBCSN for Rivalry Night to watch the game, and here's hoping for another win.
Posted by RY at 2:20 PM No comments:

Hits Can Be Dangerous

Like the Caps, I have to get back on track, and what better day than today, when the Caps play a team which has struggled as much as they have.

Today the Caps host the Edmonton Oilers in the third game of a five game homestand and the fifth out of six games this year which is against a Western Conference opponent. The Caps will be going with the same lineup as last game, except they will be starting Braden Holtby instead of Michal Neuvirth. The Oilers will be playing without star sophomore Nail Yakupov, who was scratched for a game. They will, however, be playing with Boyd Gordon (remember him?).

Without further ado, here are the predictions.

Me (0-3): 4-1 Caps. I really need this to happen, because I'm sick of having as many wins as the New York Giants. This is the game where I could finally get this win. The Oilers don't have a Semyon Varlamov; they have a Jason LaBarbera. Their young stars (Taylor Hall and Ryan Nugent-Hopkins) could give the Caps some problems, but the Caps have enough talent to take this game.

So tune in and hope for a win for the Caps (and finally for me).
Posted by RY at 5:26 PM No comments:

Having No Wins Sucks

Just ask me.
Or this guy. 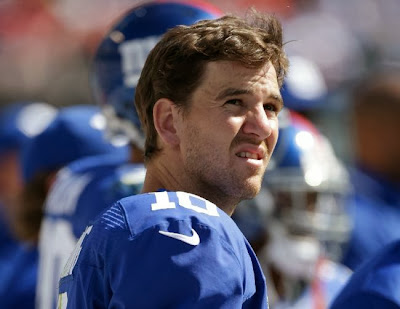 Associated Press
Posted by RY at 1:02 PM No comments:

Tonight the Caps continue their five game homestand by hosting the surprisingly hot Colorado Avalanche. Led by new head coach Patrick Roy, first overall draft pick Nathan Mackinnon, and red-hot goaltender Semyon Varlamov (remember him?), the Avs are off to a 4-0 start and are number one in a tough Central Division.

Me (0-2): Caps 3-2. I'm hoping I won't go 0-3 after tonight, but I have faith in the Caps. These two teams seem evenly matched. Varlamov has been good, and will be going up against a stellar offense. Michal Neuvirth, who may be getting the start today, was great in relief for Holtby against Calgary, and will be going up against a team which does not score much. This will really come down to whether the Caps offense can overcome the Avs defense and if the Caps can take the pressure play the Avs have. I think they will and the Caps will improve to 2-3-0 and I will improve to 1-2.

Magic Eraser (1-1): Caps 4-1. I doubt the score, but hopefully the outcome will come through.

So tune in at 7 tonight to watch the game and here's hoping for a Caps victory.
Posted by RY at 11:49 AM No comments:

If you've read some of my earlier posts, you know that I know more about sports than just hockey. I've written an analysis of why Washington DC is the most maligned sports town and I've ranked the best athletes in this city. I love hockey the most, but I know something about football, baseball, and basketball as well.

Over the next few days/weeks/whenever I will be branching out again, this time examining how the different DC-area sports teams would have been different today if something had or had not happened, perhaps many years ago or even a few years ago.

Stay tuned and be on the lookout.

Topics:
Redskins- What if Sean Taylor had not been shot?
Nationals- What if the Nats won Game 5 last year?
Wizards- What if they did not draft Kwame Brown with the first overall draft pick?
Capitals- I'm not telling you right now, it'll spoil all the fun.
Posted by RY at 9:21 PM No comments:

Now that the mini-rant is out of the way, let's be a little bit more rational about things.

2. The defense sucks. Well, unfortunately I cannot argue with this. Only Edmonton and New York Rangers have worse goals against per game than the Caps, while Calgary has the same. Still, it is early.

3. Braden Holtby is gonna choke. Yes, he has been bad; only three goalies have worse save percentages than him. However, it is still early, and as RMNB (among others) has pointed out, Holtby usually starts shaky before doing well later.

In the end, it is early. We are only three games in, and the Caps have not been bad. They have not played up to standards, but don't stick a fork in the Caps yet.

Let's wait until the Caps have played at least 20 games before we do that.
Posted by RY at 9:54 PM No comments:

After a Brief Hiatus... Predictions for Tonight

First of all, sorry for missing the game on Thursday. I ran out of time before the game started.

But, I'm here today, so here are the predictions for today's match.

Me (0-1): 5-3 Caps. The Stars are an odd bunch, and are very different from their teams the last few years. Their goaltending is not sensational, but can get the job done with Kari Lehtonen. Their offense took a big hit when they lost Loui Eriksson and Brenden Morrow last year, and their D has not been all that great either. Tyler Seguin will be looking to make a big impact in his new environs, but with a red-hot OV and Grabo for the Caps, this game could be over already.

Enjoy the game, and let's hope for a solid outing like that one in Chicago.
Posted by RY at 3:55 PM No comments:

As you all know, the season begins for the Caps in a few minutes from now.

Per Katie Carrera, there are some surprises in the lineup, with all three rookies making their regular season debuts in Connor Carrick, Michael Latta, and Tom Wilson. Martin Erat will be on the 4th line for today, and Brooks Laich will play on the second line.

This game has been scrutinized for a while for some reason, and there has been a lot of excitement for the Caps' first foray into Metropolitan Division life with a good opening night match against the defending champs.

Me: 3-2 Caps. People (those on Bleacher Report especially; looking at you Steve Silverman) seem to think losing Mike Ribeiro will absolutely kill the Caps and they do not have a chance against the defending champs. But the bottom line is, both teams played well against each other in the preseason with split squads. It will be interesting to see who wins, but I think the Caps come out on top.

Well, not much left to say, except...